……… the fashion that can’t be priced 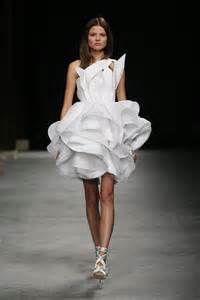 Although fashion garments can be categorised into 3main parts, Haute Couture which is quick dying, is the most glamorous. Pret-e-porte(ready to wear) and mass production which are the two other categories have being more dominant due to their affordability and less stringency in production.

Haute couture: French word for “high sewing” or “high dressmaking” or “high fashion”) refers to the creation of exclusive custom-fitted clothing. Haute couture is fashion that is constructed by hand from start to finish, made from high quality, expensive, often unusual fabric and sewn with extreme attention to detail and finished by the most experienced and capable sewers, often using time-consuming, hand-executed techniques. Couture translates literally from French as “dressmaking”, but may also refer to fashion, sewing, or needlework and is also used as a common abbreviation of haute couture and refers to the same thing in spirit. Haute translates literally to “high”. A haute couture garment is often made for a client, tailored specifically for the wearer’s measurements and body stance. Considering the amount of time, money, and skill that is allotted to each completed piece, haute couture garments are also described as having no price tag – in other words, budget is not relevant.

HISTORY OF HAUTE COUTURE The couturier Charles Frederick Worth (October 13, 1826–March 10, 1895), is widely considered the father of haute couture as it is known today. Although born in Bourne, Lincolnshire, England, Worth made his mark in the French fashion industry. Revolutionizing how dressmaking had been previously perceived, Worth made it so the dressmaker became the artist of garnishment: a fashion designer. While he created one-of-a-kind designs to please some of his titled or wealthy customers, he is best known for preparing a portfolio of designs that were shown on live models at the House of Worth. Clients selected one model, specified colors and fabrics, and had a duplicate garment tailor-made in Worth’s workshop. Worth combined individual tailoring with a standardization more characteristic of the ready-to-wear clothing industry, which was also developing during this period. Following in Worth’s footsteps were Callot Soeurs, Patou, Poiret, Vionnet, Fortuny, Lanvin, Chanel, Mainbocher, Schiaparelli, Balenciaga, and Dior. Some of these fashion houses still exist today, under the leadership of modern designers. In the 1960s, a group of young designers who had trained under men like Dior and Balenciaga left these established couture houses and opened their own establishments. The most successful of these young designers were Yves Saint Laurent, Pierre Cardin, André Courrèges, Ted Lapidus, and Emanuel Ungaro. Japanese native and Paris-based Hanae Mori was also successful in establishing her own line. 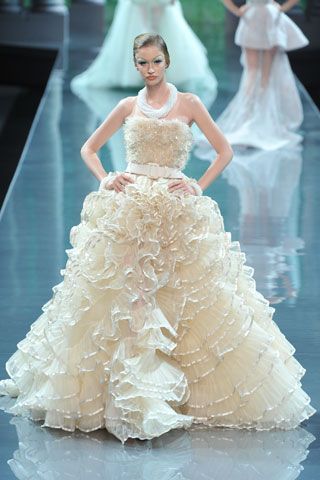 Legal status In France, the term haute couture is protected by law and is defined by the Chambre de commerce et d’industrie de Paris based in Paris. The chambre syndicale de la haute couture is defined as “the regulating commission that determines which fashion houses are eligible to be true haute couture houses”. Their rules state that only “those companies mentioned on the list drawn up each year by a commission domiciled at the Ministry for Industry are entitled to avail themselves” of the label haute couture. The Chambre Syndicale de la Couture Parisienne is an association of Parisian couturiers founded in 1868 as an outgrowth of medieval guilds that regulate its members in regard to piracy of styles, dates of openings for collections, number of models presented, relations with press, questions of law and taxes, and promotional activities. Formation of the organization was brought about by Charles Frederick Worth. An affiliated school was organized in 1930 called L’Ecole de la Chambre Syndicale de la Couture. The school helps bring new designers to help the “couture” houses that are still present today. Since 1975, this organization has worked within the Federation Francaise, de couture, du Prêt-à-Porter des Couturiers et des Createurs de Mode. The criteria for haute couture were established in 1945 and updated in 1992. To earn the right to call itself a couture house and to use the term haute couture in its advertising and any other way, members of the Chambre syndicale de la haute couture must follow these rules: Design made-to-order for private clients, with one or more fittings. Have a workshop (atelier) in Paris that employs at least fifteen staff members full-time. Must have twenty, full-time technical people in at least one workshop (atelier). Every season, present a collection of at least fifty original designs to the public, both day and evening garments, in January and July of each year. However, the term haute couture may have been misused by ready-to-wear brands since the late 1980s, so that its true meaning may have become blurred with that of prêt-à-porter (the French term for ready-to-wear fashion) in the public perception. Every haute couture house also markets prêt-à-porter collections, which typically deliver a higher return on investment than their custom clothing.[citation needed] Falling revenues have forced a few couture houses to abandon their less profitable couture division and concentrate solely on the less prestigious prêt-à-porter. These houses are no longer considered haute couture. Many top designer fashion houses, such as Chanel, use the word for some of their special collections. These collections are often not for sale or they are very difficult to purchase. Sometimes, “haute couture” is inappropriately used to label non-dressmaking activities, such as fine art, music and more. Members of the Chambre Syndicale de la Haute Couture For the Spring-Summer 2012 season the official list of members is: Official members Adeline André—Gustavo Lins (fr)—Chanel (Karl Lagerfeld)—Christian Dior—Christophe Josse—Franck Sorbier—Givenchy—Jean Paul Gaultier—Maurizio Galante—Stéphane Rolland 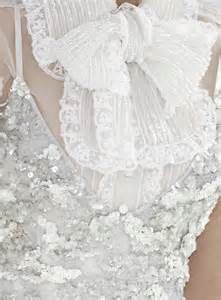 The Glamorus HAUTE COUTURE What’s not in doubt is that haute couture – the term translates as “high sewing” – is a spectacular anachronism. Colossal in its costs, tiny in its clientele and questionable in its influence, it still remains one of the great themes of Parisian life. In his book, The Fashion Conspiracy, Nicholas Coleridge estimates that the entire couture industry rests on the whims of less than 30 immensely wealthy women, and although the number may have grown in recent years with the new prosperity of Asia, the number of couture customers worldwide is no more than 4,000. At this stratospheric peak of the rag trade, many designers never even meet the women who buy their clothes. Some are known only by numbered codes, do their buying through intermediaries and settle their bills from Swiss bank accounts. To qualify as couture, a garment must be entirely hand-made by one of the 11 Paris couture houses registered to the Chambre Syndicale de la Haute Couture. Each house must employ at least 20 people, and show a minimum of 75 new designs a year. So far, so stirringly traditional, but the Big Four operators – Chanel, Dior, Givenchy and Gaultier – increasingly use couture as a marketing device for their far more profitable ready-to-wear, fragrance and accessory lines. It isn’t hard to see how this works in practice. “Haute couture is what gives our business its essential essence of luxury,” says Bernard Arnault, the head of LVMH, which owns both Dior and Givenchy. “The cash it soaks up is largely irrelevant. Set against the money we lose has to be the value of the image couture gives us. Look at the attention the collections attract. It is where you get noticed. You have to be there. It’s where we set our ideas in motion.” 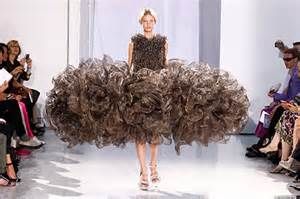 The big idea being the one known in the trade as “name association”. Couture outfits may be unaffordable, even unwearable, but the whiff of glamour and exclusivity is hard to resist. The time-starved modern woman who doesn’t make enough in a year to afford a single piece of couture can still buy a share of the dream for the price of a Chanel lipstick or a Givenchy scarf. For all this, couture has been in decline – the optimists would say readjusting to changed conditions – for years. The number of houses registered to the Syndicale has halved in the last two decades. Pierre Cardin once had almost 500 people working full time on couture, but by the Eighties the number had fallen to 50, and today the house is no longer registered. Modern life tells the story. Younger women, even the seriously wealthy ones, find ready-to-wear clothes invariably more practical and usually more fun. Couture’s market has dwindled to a core of ageing European grandes dames, the X-ray wives of old money American families, and the female relatives of oil sheiks. Asia’s new wealth has slowed the decline without arresting it. “Haute couture is a joke,” scoffs Pierre Bergé, the former head of Yves St Laurent – another house that no longer creates it. “Anyone who tells you it still matters is fantasising. You can see it dropping dead all around you. Nobody buys it any more. The prices are ridiculous. The rules for making it are nonsensical. It belongs to another age. Where are today’s couturiers? A real couturier is someone who founds and runs their own house. No one does that any more.” Why, then, are the surviving couture houses smiling? Partly because they trade in fantasy, and, in these times, more people want to fantasise. “We’ve received so many orders we may not be able to deliver them all,” says Sidney Toledano, head of Dior. So the clothes are rolled out and the couture losses roll in, and everyone agrees that it’s good business.

View all posts by admin →